I was born to English-speaking parents and so naturally learned their language. When I was in fifth or sixth grade, a Korean family moved to our rural area. The children attended my school. Initially, we could not communicate much. My words made no sense to their ears, nor theirs to mine. Over time, the family learned the language and culture of their adopted country. The kids excelled in school. One became a physician.

Early in my 20s, I took a medical terminology class. Not only was it required for a degree in emergency medical services and useful for my paramedic training, it continued to serve me well later when I became an RN. The mostly Latin words could be used to decode mysterious disease names or anatomical parts.

Attorneys, astronauts, mechanics, all have a language of their own. Even quilters use a vocabulary not known to the average person. Long-arm machines, sashing, hole-in-the-barn-door, feed dogs, wool batts are terms probably not thrown around a courtroom or chemistry lab or car showroom. For those of us who've sewn and quilted for years, such phrases are familiar.

Someone new to quilting might feel a little like those children who came to my school and heard only what sounded like gibberish in their first weeks. But with continued exposure, there's a breakthrough, and little-by-little, a new language is learned.

Last week, Tom surprised me with the terminology he's picking up. He pointed to a book on long-arm quilting and casually commented: "I like this combination of feathers and meanders." 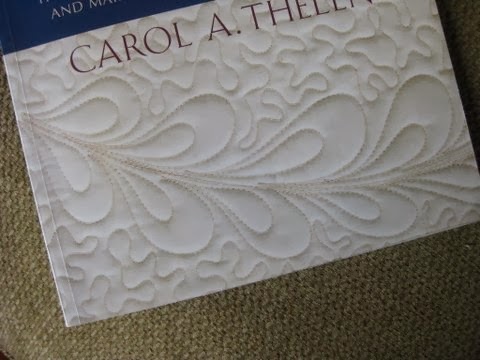 Getting Ready for the Big Machine

In 2004, I spent a good chunk of the winter building a chain-link fence to enclose a little nursery that Denise and I would open later that spring. Plants needed ordered. A 10-by-12 building needed to be hauled in. Shade houses needed assembled. Many things needed to be done in preparation for our first day of business. I couldn't just snap my fingers and see our dream nursery just magically appear. 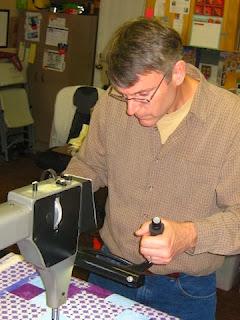 As Denise and I anticipate the arrival of our longarm quilter, we're plugging away at the many things that need to be done first. Last week we waltzed into our credit union and set up a business checking account. Oddly enough, the most important thing to me was that Quail's Nest Quiltworks be spelled correctly. The clerk asked what my official title would be. I thought for a moment and said, "Operations Manager." Sure, why not?

The website and blog are underway, and I'll handle the books as well. I'm currently building the quilting room -- which is the single most time-consuming project in all this. Reminds me of that chain-link fence. And when the Big Machine arrives in late February, Denise and I will then learn the technicalities of operating the slick contraption. Once we learn how to use and maintain it, then we'll practice like mad to perfect those beautiful feathers.

All this takes what? Time. Dreams become reality when the preparation is done.

The Little Quilt that Started My Newfound Interest

When my niece Timminy graduated from high school last year, I offered her two choices as a gift. Some money, which I figured would be gone in a day in the midst of her college prep shopping, or a wall quilt. She debated a little and decided on the wall quilt. I probed about style. "Non-traditional" was her phrase, and then blues and greens for colors. Trees are some of her favorite things, so that would be the theme.

I had seen and savored a very cool wall quilt hung on display at a local fabric store, and had attempted to sign up for the class they had scheduled. Alas, they'd cancelled, as too few had shown interest. I was on my own.

Paper piecing can be so fun. Accurate, straightforward, difficult to explain to a newbie, but easily learned when the teacher stays close at hand. That had been my experience so far.

When I began working on it, there was nothing fun about it. Nothing straightforward either. Too many odd- shaped pieces, too much brain-bending, trying to cut out chunks of fabric and line them up on the back of the paper, knowing the bit of fabric needed to be folded away from the sewn seam and trimmed carefully. A mis-cut might not be noticed until down the line, after several other seams depended on that earlier one. The first of nine blocks took many hours to complete, and I was not sure I could make myself go on to another. I told Tom "I'd rather poke my eye out with a pencil than finish this quilt."

But there was the fabric, all purchased and ready, calling for me to continue. And then there was the niece, expecting a modern quilt of greens and blues, of trees, to hang on a dorm room wall. I kept going, a little at a time. By the last block, I had each down to a little more than an hour apiece -- if I didn't make any mistakes.

After the top was completed, I still had a ways to go. I had no idea how to machine quilt, and the next class on the subject lay a couple months in the future of Timminy's departure to college. So I committed to trying to finish it by Christmas, or at least the end of her Christmas break.

I finished the little quilt yesterday, presented it to her today. And this afternoon, she'll hang it on her dorm wall. I hope my sister-in-law will bring a phone photo of it gracing the space above her bed when she returns. 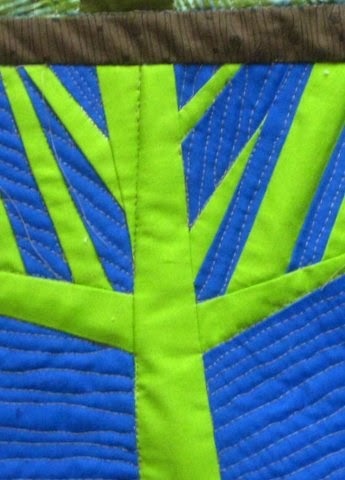 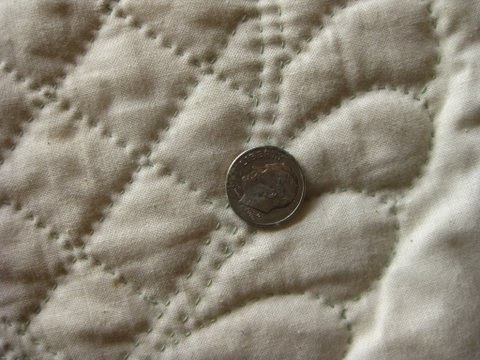 I admit to being a quilting snob in my past. I would not have dreamed of machine quilting my finished piecework had I even known how. My neat, tiny stitches completed every quilt project I made. But being a hand-quilter meant constant holes in my fingers from tiny needles driven time and again through the layers of backing, batting and quilt top.

During the years I worked in an emergency department, intact skin held a high level of importance for me. I don't like to remember all the body fluids I dealt with. Yes, I wore gloves. But my own intact skin helped protect me as well. And I still work as an RN, but that is only part of the reason I'll not likely ever return to hand-finishing my work.

Less than a year ago, I made the most amazing discovery: machine quilting has come a long way, and can be every bit as beautiful, creative as with tiny needle, thread and thimble at the quilting frame. The time saved makes the more modern way far more practical.  I'm head over heels loving what machine stitching adds to a beautiful pieced quilt top. 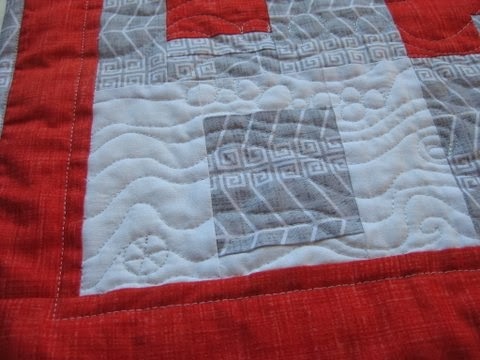 Everything you see on this blog now and for the next month or so will be done on a home sewing machine. 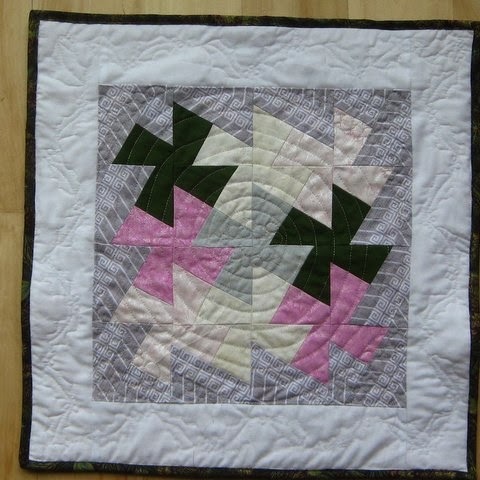 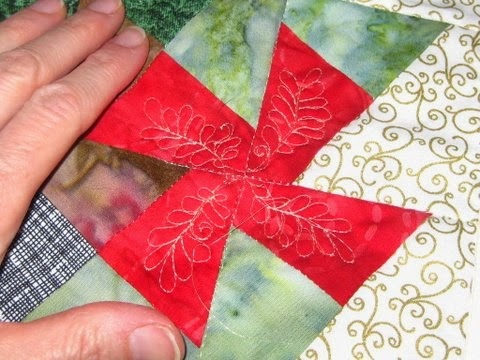 Tom and I will soon be quilting on a long-arm machine. Give us a few weeks of further learning and practice. Please come back to check the blog as we begin to post new photos of our quilt-work in the near future.
Posted by Tom Nash at 10:35 PM 2 comments: