We've now had our machine for a bit over a week. It's a lot of fun. That's a blessing, as we need lots of practice time on it, learning how to load quilts, and then quilt them. It feels like anything but work to work on muslin "quilt sandwiches".

I'm not a very mechanical person, but we have been told by most every person we know who has a longarm quilting biz that you must become a mechanic. Nothing complicated, but there are adjustments to be made, diagnostics to look into, constant watching of the stitch quality.

The first "quilt" made on it was loaded by Jack Boersma (of Boersma's Sewing Center) and Tom. I shot photos, hoping to document which layer of quilt went on what roller and in what order. And I scratched down notes just as quickly as I could.

Despite photos (which didn't show things as clearly as I intended) and notes (also lacking in description of which end -- top or bottom, and back or front of fabric -- of which layer -- top, batting, backing -- went where and in what order, I was lost after unloading our first little practice piece and trying to load on a bigger one. Consulting my notes, photos, two books, myriad youtube videos and a phone call to Jack Boersma, I eventually got it on the machine. And have now finished a skinny twin-sized one, simply playing with different designs, made-up or seen in one of the books I've bought. 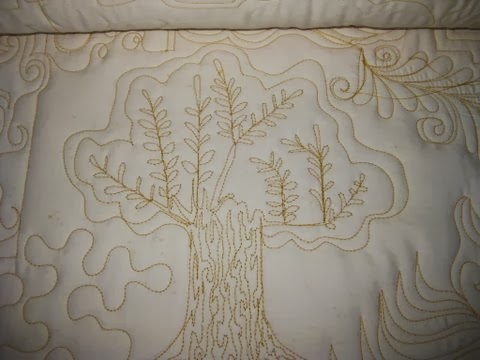 And now I think I can load a quilt without having to tax my brain too hard.

I've quilted one charity quilt, baby sized, and we have another on hand to finish. Next week I'll pick up at least one more. And I believe someone dropped off a quilt (queen sized?) at my work today for me to practice on. All the work and expense of fabric that goes into quilts, and several people have offered to let me "practice" on their project. I am awed and honored, and hope to not disappoint them.

Tom had been finishing up some carpentry and has only begun to practice. I fear, though, he will soon catch up to me and maybe pass me up. He proved a potentially very good quilter at the class we took in early November. 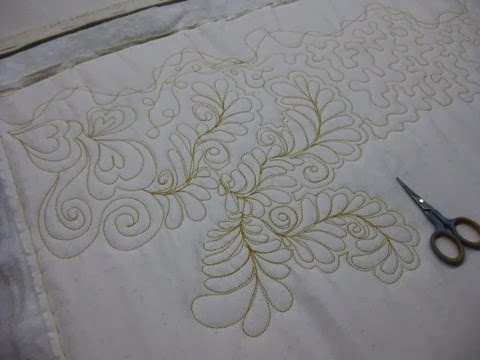 Our Gammill long-arm quilting machine has arrived, and is being set up right this very minute. We've been waiting for this for months!!! No photos yet, as they are just getting started.

This afternoon, we'll get some intensive training!